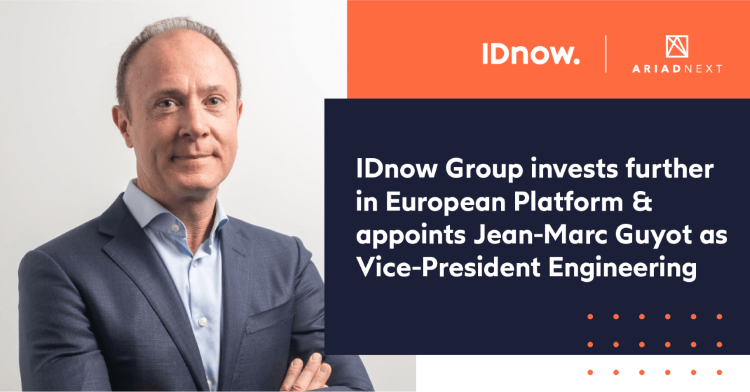 Rennes and Munich, July 5, 2022: IDnow Group, a European leader in identity verification and digital identity, appoints Jean-Marc Guyot as Vice President of R&D (Research and Development) at IDnow group. His main responsibility will be the further unification and development of one joint platform for the European market.

Jean-Marc Guyot’s appointment will engage a new dynamic in the R&D department, with the aim of  driving best in class engineering teams and meeting the group’s ambitions of leading the way in identity verification.

His responsibilities will include: uniting the IDnow and ARIADNEXT engineering teams, located across several countries of the world, into a cohesive entity; orchestrating technological choices and orientations and defining architectures to meet the product teams’ requirements, including automatic, video and signature solutions; streamlining and combining all the Group’s existing and future verification solutions to optimise the new IDnow platform.

“I’m looking forward to building a high-performing engineering department at IDnow. The former IDnow and ARIADNEXT teams both have valuable benefits and skills and my job will be to bring this together into one platform that answers the needs of European companies across jurisdictions and use cases,” explained Jean-Marc Guyot.

“I’m especially excited to work with the teams in France and Germany and to meet the high standards in technology that are key for the IDnow Group,” he added.

Jean-Marc Guyot started his career in 1995 as a system architect at LSI Logic, where he worked on the first Digital Terrestrial TV digital demodulation chip. He then joined NXP as Product Marketing Director.

In 2004 he founded Silembia, a high-tech startup, that he then sold to Silicon Laboratories (an American semiconductor company) and moved to the USA to manage the merger of the teams. Back in France in 2014, he joined ENENSYS to create the Telecom Business Unit with a focus on LTE Broadcast technology. There, he actively participated in the 3GPP SA4 standardisation committee. Early in 2019, he became Vice President of Engineering for Cloud-Based Security Services at WALLIX, before taking over the entire R&D department. He created the R&D site in Rennes which now employs more than 40 people and also re-sited the company in the future CyberPlace beacon building in Rennes. Finally, he and his teams won the “Grand Défi Cyber” with the OSCAR project and implemented the transformation of the R&D teams into agile mode.

“Jean-Marc brings a wealth of technology and international leadership experience into his role. His arrival at IDnow will further accelerate the development of IDnow’s Identity proofing platform, starting with combining the best-in-class technology stack from all IDnow group companies. I’m looking forward to working with him,” commented Vikas Seth, IDnow Chief Product Officer.